About a week ago I packed my hiking bag that I had bought just before Christmas and headed off to the airport at 3am in the morning. I was on my way to see friends I hadn’t seen in well over two years. a 3am start, a 2 hour car ride to the airport, a 2 and a half hour flight and then a further 3 hour drive followed finally by a 20 minute hike through what I can only describe as Narnia… Phew, we arrived!

I was so pleased that I had bought a new hiking bag. I really think it made so much difference and it meant I could have my arms free whilst having my spare jumpers and boots clipped to the back of it! 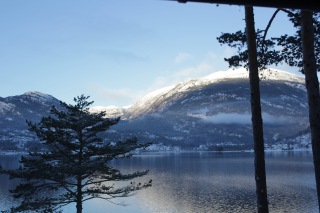 When I arrived at the Cabin 2pm Oslo time. Needless to say, I was pretty exhausted, but also overwhelmed by the sheer beauty of the place. We were staying in a cabin overlooking the beautiful lake of Seljord home to a monster called Selma.

If you haven’t visited Norway before or know much about the country. The first thing to learn is that they people there are on the whole, very relaxed and friendly. They mostly all own a second home called a hytte which simply means cabin.

Now we were in and settled we had planned to spent the next week off the grid with no running water, no heating (except a log fire) and fetching water from the lake to boil and drink. It was amazing!

Coming from England, a country where lack of washing will strike horror in even the most adventurous of people, I was pretty hesitant about the whole thing and worried that by day 3 my friends would be throwing me in the lake. Luckily however, things were not that bad at all and it turns out we really don’t need to wash all that much, and platting our hair is a great way to stop it going all frizzy – plus, living in baggy jumpers and cosy loungewear is my idea of heaven. 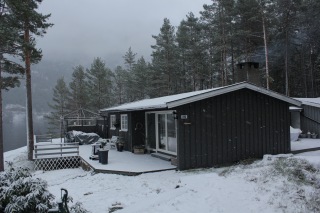 That day we had fun exploring round the cabin and cooking food that we had picked up in a local store on the way there, we played games, sat by the fire and drank hot coco which in Norwegian they would call Hygge!

If you don’t know much about hygge I would 100% recommend a cute little book on it called ‘The Little Book of Hygge‘ Whilst it says its Danish, all the Scandinavian countries use the word to mean the same thing. It’s something I wish we had a word for in English! There are blogs, movies and clothes named after this cosy feeling word so its certainly something to check out!

Now you have to remember we are in a country about 1.3X larger than the UK with less people than the population of London. We have about 70 million people in the UK and Norway have about 6 Million… So with that in mind there is a lot of space there and that means putting the bathroom in the cabin outside of the cabin itself.

Yes, we had to walk to the bathroom! Sunset was around 4pm, so that meant we spent a fair amount of the trip walking back and from the bathroom outside through dark enormous snow covered trees which creeped me out a bit. So much so that on the second venture to the bathroom I asked one of the girls to come as I was genuinely convinced there were creepy wood dwelling creatures watching me! It also didn’t help that Aurora told us a story about ‘The Cabin Man’… Thanks Aurora!

One of my favourite things about the trip was probably spending time with the girls and playing games. Spending the evenings laughing our heads off at each other and reminiscing was wonderful, especially when we could incorporate games into it. One game we played that was in Norwegian was called EGO. Because Lish and I don’t speak fluent Norwegian (Though I like to think we can) Kaja and Aurora translated.

In the game, each player takes turns and is asked a question, there are three possible outcomes to that question and the other players have to guess what their friend is going to say. It was quite fun and surprising at the same time, though on the whole we could all guess what each other was going to say because we know each other so well.

Oh I hadn’t forgotten! The infamous monster, who I have a sneaky suspicion is actually really friendly. 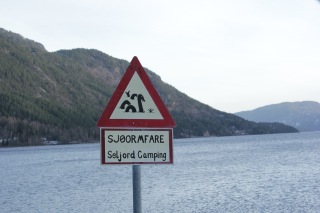 The residence of the town are so convinced that Selma is real that they have a warning sign up, a watch tower and 24/7 video recording which has apparently caught sight of her. We watched some videos on this when we were at the cabin and they were quite convincing. Since the lake itself is a good 700km squared, we were not prepared to go looking for her. Instead we watched from our cabin, but I am sad to say didn’t catch sight of her.

On the side of the lake closest to Seljod’s main town, there is a watch tower as I previously mentioned. On one of the days we walked round to the tower and went up it and looked out across the beautiful Norwegian landscape covered in snow. Below you can see a photo of the spot residence have (on multiple occasions) seen Selma, maybe if you look close enough you’ll see her too! 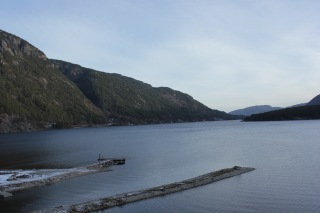 Weather wise on the trip we got so lucky. On our first night it was a stunning hot pink sunset which over the week turned into a snow storm and finally finished with crisp blue skies and some incredible cloud movement. Because we were only a few hours away from Oslo, and not up the top of Norway (where I was back in October – Trondheim) it was pretty unlikely we were going to see the Aurora Borealis. After the snowfall, Kaja and I went for a little stroll in the forest around the cabin, because there were not really any paths this involved climbing up and down the mountainside, falling in snow and having trees drop snow on our heads. It was quite fun and beautiful. There is also something quite magical and peaceful about feeling confident enough to walk around a cabin outside in your pyjamas knowing that you won’t see anyone else. I would highly recommend it!

After the cabin stay we drove back to Oslo, and stopped off at one of the last remaining Stave churches! There are only 28 of these amazing churches left in Norway and I am so, so humbled to have seen four of them! If you ever get the chance to visit this incredible country I would highly recommend visiting one of these architectural triumphs! Religious or not – they are spectacular! 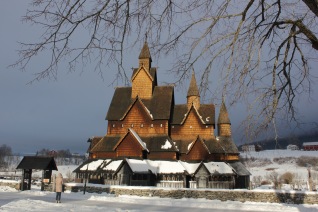 Ahh and that is it! I really cannot wait to go back and see my friends again soon, I always feel like I have been to a spa for a month after a few days stay with the girls in Norway and I think its something we should do more often. Something has to be said for this stunning country and its ability to create feelings and words out of doing nothing! Here is to hoping that one day I can retire to Norway and live out my days as a reclusive English girl in her Norwegian cabin with a herd of reindeer!

If you are thinking of visiting Norway or would like to learn more about the country, check out The Lonely Planets Guide to Norway here!